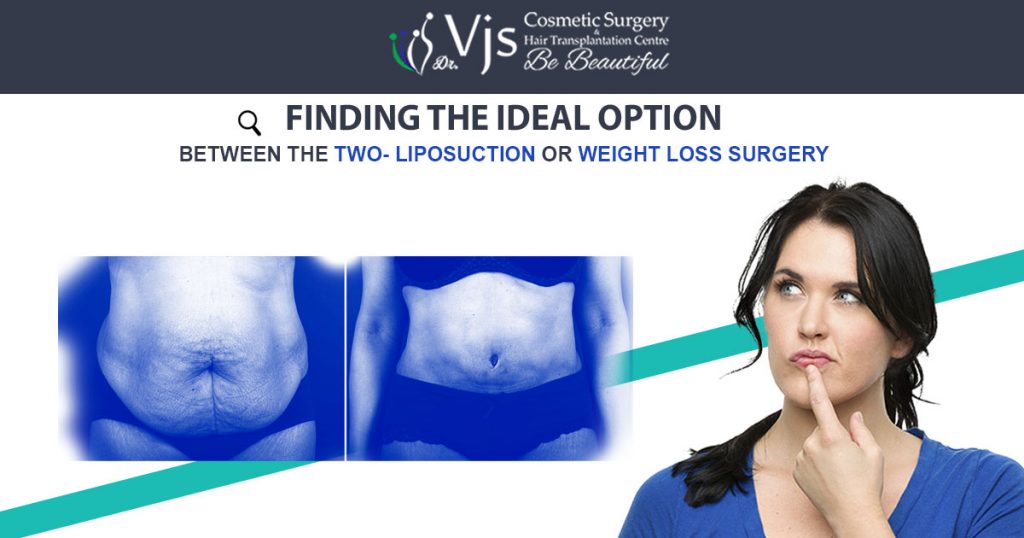 The weight gain and obesity have become issues in the modern world. People are suffering from these menaces and are unable to have control over their increased weight. Such people see a ray of hope when they get to know about the surgical procedure of treating their unexplained weight. They are encountered with two choices – liposuction surgery and bariatric procedure.

What is liposuction surgery?

Liposuction is a surgical procedure that is performed for removal of extra fat from the body. It is also known as lipo, lipoplasty, or body contouring. This is a cosmetic surgery. It is performed to reshape or contour the body for making it look more attractive. It involves removal of extra fat from the thighs, hips, buttocks, abdomen, arms, neck, or back. It works best for those who have not benefitted from diet or exercise.

Liposuction is ideal for those who:

Who should avoid liposuction?

What is bariatric surgery?

Bariatric surgery is a collective name to all types of weight-loss surgeries. There are many surgeries that may be involved in this type of surgery such as gastric sleeve, gastric bypass, or LAP BANDR surgery. This surgery is aimed at addressing the issues of excessive fat and their causes.

Bariatric surgery is for those who:

How to choose between bariatric surgery and liposuction?

The liposuction surgery does not yield long term benefits and it has been observed that fat generally reappears within a year of the surgery. Even, the fat deposits to the other areas of the body. This surgery can be used for reshaping the small amounts of body fat.

Bariatric surgery is a typical weight loss program that reduces calorie intake and the way of deposition of fat. It helps in achieving along lasting effect over the weight by dealing with morbid obesity.

Liposuction seems to garner more attention of the people due to its name and being new. However, it fails in yielding promising results in terms of weight management and improved health.

Overall, the liposuction seems to be attractive for all those who are aiming to weight loss. However, it is only for those who have some excess fat deposit at a certain part of the body. The bariatric surgery is an appropriate surgical procedure to lose weight for those who have an excessive fat deposit and the exercises as well as diet have not undone their gained weight. It helps to overcome the issues of obesity by treating its underlying causes and giving people a long-term solution to their increased weight.