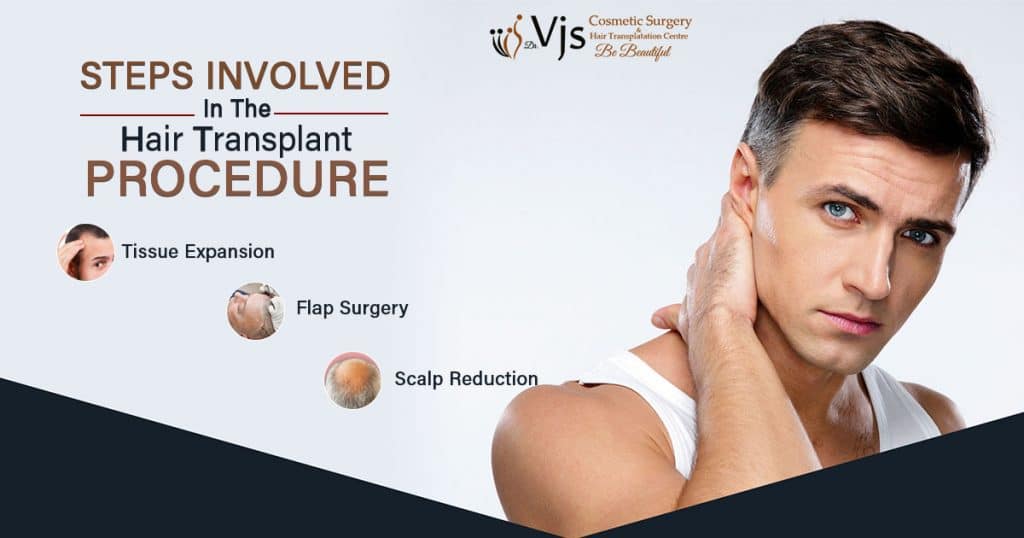 Dr. VJs Cosmetic Surgery & Hair Transplantation Centre: Dr. C. Vijay Kumar, Hair transplantation is the surgical treatment in which the surgeon harvests the hair from the donor region especially from the back of the scalp or from any other body part which has thick hair and then transplants that harvested hair on the balding or thinning areas precisely. Once the grafting process is done then surgeon covers the treated area with bandages. A hair transplant is a sensitive procedure and should be performed by a professional and experienced surgeon.

Tissue expansion is another method that is used in treating baldness issues. In this method, a balloon-like instrument known as a tissue extender is found underneath a hair follicle that resembles a bald area. The apparatus is slowly opened with salt water during the week, which expands the skin and gives rise to new skin cells. A bulge below the head is created by this procedure which affects the hair follicle, peculiarly after few weeks.

This method is tailored to each patient because they can cover large bald areas steadily. The flap size and its placement based on the goals and requirements of the patient.

Surgeons cut the bald scalp portion and raise a flap of hairy skin over the surface while still attached at one end. Surgeons brought back the flap producing hair to its original position and sewn in place, but its original supply of blood still tethered. As you heal, you will notice that the stain is covered by swollen hair – or at least obscure., Which extends to the very tip of the incision.

Lack of coverage of bald and thin areas on the top and back of the scalp. This is not useful for frontline airline coverage. A portion of the bald scalp is removed after injecting the local anesthetic. The pattern of the removed skull varies widely depending on the goals of the patients. Doctors usually remove a section of the scalp in the opposite wind-shape, If a large amount of coverage is required. The size of the excision can be the same as U, numbered ellipse or any other size.
Procedure Steps

Before: The candidates who undergo this procedure should pay some attention to hair loss along with the growth of hair on the back and sides of the scalp which are healthy and thick.

Step 1: Surgeon uses a tube-like tool that harvests round grafts from the donor area and transfers the harvested grafts to the affected areas.

Step 2: It is surgically inserted over the balding or thinning area when the skin has stretched enough beneath the hair.

Step 3: During flap surgery, the surgeon cuts out a portion of the bald scalp and makes a flap of hair-bearing skin, which is later on sewn into its point.

Step 4: The scalp reduction pattern differs widely, but meet all the requirement of the patients by regaining hair and covering bald areas.

After: The effective outcomes of hair transplantation boosts morale and enhances the physical appearance of the person.